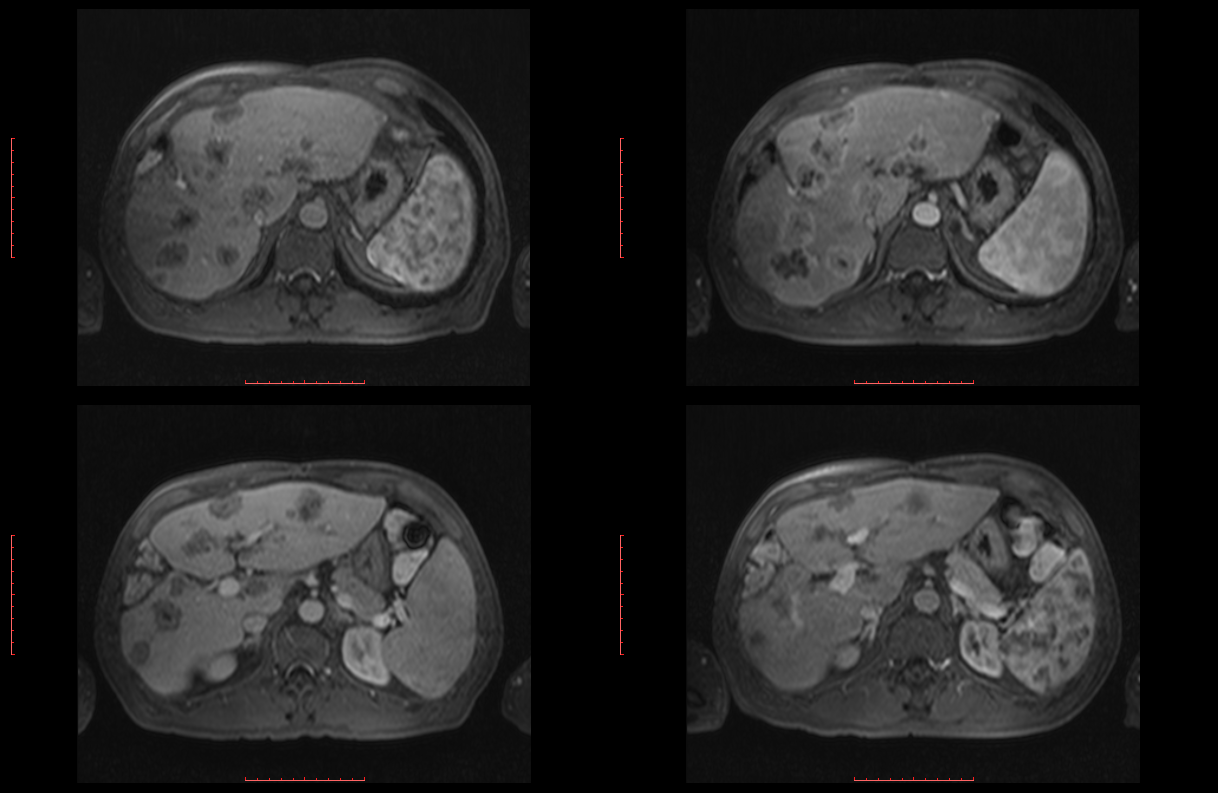 Posted at 11:09h in News by javier@diligent.es

A 67 year old male with stage 4 colon cancer underwent surgical resection of a part of his colon containing cancer in November of 2013. During the operation, he was noted to have hepatic metastases. After recovery from his colon surgery, the patient was started on chemotherapy. In 2014 and 2015, he underwent two separate open surgeries to remove liver masses and chemotherapy was continued. From 2015 to 2018, his cancer was in remission and he was maintained on adjuvant chemotherapy. In May of 2018 during routine follow up, the patient was noted to have marked progression of his liver tumors in addition to new lung masses. Due to these findings, he was started on a different chemotherapy regimen plus an immunotherapy drug. In July of 2018, three of the patient’s liver masses were treated with thermal ablation by ultrasound guided focused ultrasound (USgFUS). He had a partial response to this treatment, but, unfortunately, his disease continued to progress and he was maintained on the chemotherapy+immunotherapy regimen.

In April of 2019, an MRI of the patient’s abdomen revealed countless liver masses that had increased in number and size since his last evaluation (Figure 1). The patient received an evaluation by the Tumor Board at Comprehensive Tumor Center Barcelona, Barcelona, Spain and his inclusion in the THERESA study was approved. The THERESA study is a first-in-human clinical trial sponsored by Histosonics Inc. to establish the safety and efficacy of their histotripsy device to treat liver tumors. The patient was not considered a candidate for other surgical or locoregional therapies.

On May 13, 2019, the patient underwent histotripsy-mediated ablation of a 1.2 cm x 1 cm lesion in his liver. No adverse events occurred during or after the procedure, including no pain. In the weeks following the procedure, lab tests revealed a significant decrease in the value of the tumor marker CEA and the patient continued to feel well with no pain. Follow up MRI scans at 1, 4 and 8 weeks showed a decrease in size of the targeted, treated lesion as well as a decrease in size of numerous other, non-treated lesions throughout the liver (Figure 2). Immune assessment (CD3, CD4, CD8, IL6, Complement) shown changes on these values.

Following the advice of the patient’s oncologist, a new chemotherapy regime was initiated 5 weeks after the ablation procedure. After this, both tumor marker levels and the size of the liver lesions continued to decrease.

On December 2019, there was progression of the liver metastases and appearance of a new tumor in the colon. New treatment options and clinical trials are still being explored. At present, 1 year after his treatment with histotripsy and evidence of an abscopal effect, the patient has slow progression of his disease and is still alive and eager to continue his battle for survival.

Surgical resection is the established first-line treatment for primary and metastatic liver cancer. However, surgical removal with curative intent is only feasible for a minority of patients with liver metastases (10-25%) since only a small proportion of patients have tumors that are entirely resectable at presentation1. Despite the survival advantage of hepatic resection on colorectal cancer liver metastases, relapse is common following curative resection2. In addition, surgery is an invasive procedure associated with high rates of morbidity and mortality3.

Ablation techniques are promising alternatives for those patients who are not eligible for surgical resection or who have failed other therapies. Current ablation methods include non-thermal ablation methods such as percutaneous ethanol injection (PEI) and irreversible electroporation (IRE) and thermal modalities such as radiofrequency ablation (RFA), microwave ablation (MWA), and high-intensity focused ultrasound (HIFU)4.

Despite the efficacy of some of these local thermal ablation modalities, significant limitations exist due to their mode of action (thermal tissue destruction). Thermal ablation is inconsistent in tissue with non-uniform heat dissipation patterns, which is common in liver tumors5. It often results in incomplete tumor necrosis in tissue that is located near major vessels6, 7. Consequently, the shape and the size of the ablation zone may be unpredictable and the efficacy of thermal ablation may be restricted8. In addition, thermal ablation methods are often unsuitable for treating tumors larger than 3 cm due to excessive treatment time and practical ultrasound probe sizes9-11. Most complications associated with RFA and MWA are consequences related to thermal injury12. Another limitation of these methods is the lack of imaging feedback during treatment. Thus, CT or MRI evaluates the effect of ablation treatment after the application of thermal treatment while no real-time imaging provides monitoring during treatment13.

High intensity focused ultrasound (HIFU) is a non-invasive, image-guided, thermal ablation method. Unlike percutaneous thermal modalities, HIFU is completely extracorporeal and lacks the risks of bleeding and tumor seeding with the direct puncture of tumors. HIFU can improve upon other thermal ablation modalities due to its non-invasiveness, real-time feedback and the ability to scan the focal zone over a large volume13. As with the other thermal-based methods, it is limited by the heat-sink effect, resulting in reduced efficacy in ablating tissue near major vessels and by extended treatment time for larger liver volumes13. Another major challenge in the non- invasive treatment of liver tumors using HIFU is rib obstruction, which may result in secondary hot-spots near the treatment main focal zone, inducing loss of therapeutic precision and collateral damage14. Moreover, because of the high ultrasound absorption coefficient at the bone-tissue interface, overheating of ribs and surrounding tissue often results in unwanted tissue damage. Skin burns and subcostal edema have been reported with HIFU ablation cases15, 16.

Therefore, developing new strategies in which a liver tumor can be ablated non-invasively and avoiding thermal-related collateral damage and inefficacy would be a major clinical advancement. To address this unmet clinical need, cavitation-based ultrasound guided treatment (histotripsy) is a promising option to destroy liver tumors and overcome the limitations of currently available ablation modalities.

Histotripsy is a treatment technology that mechanically destroys targeted tissue through the precise targeting of acoustic cavitation17-19. The ablation system is an image-guided device designed to deliver non-invasive, non-thermal histotripsy for local treatment that has the potential to overcome many limitations of other focal liver tumor treatment options.

The Histotripsy Group in the University of Michigan´s Department of Biomedical Engineering invented and pioneered the development of focused ultrasound histotripsy more than twelve (12) years ago. Starting with their earliest work with the use of microbubbles to cause tissue damage, this group developed histotripsy into a highly controlled and predictable tool to remove unwanted tissue with microscopic precision. In 2010, HistoSonics, Inc. entered into a worldwide exclusive license with the University of Michigan for exclusive rights to the entire portfolio of histotripsy patents and patent applications.

An additional potential benefit of histotripsy may be as immunogenic ablation20 if it can be used to stimulate tumor-specific immune responses capable of magnifying the impact of checkpoint inhibition immunotherapy. The characteristics of this cavitation-based ablation likely allow cytokines and metabolites, not destroyed in the tumor micro-environment, to become highly immunogenic and contribute to the abscopal effect, where shrinkage of untargeted tumors occurs secondary to an immune response.

The abscopal effect was first described in patients who were receiving radiation therapy that were noted to have regression of tumors that were in a non-irradiated zone. It describes the ability of localized radiation to initiate an antitumor response that kills cancer cells distant to the primary target. Similar to radiation, focused ultrasound has been shown to produce an abscopal effect in both preclinical and human cancers. When combined with immunotherapy, the abscopal effect could produce a durable treatment response to control or eradicate metastatic cancer.

This case report shows clear evidence of an immunologic relationship between histotripsy ablation and the abscopal effect. A patient with progressive and extensive metastatic disease with a short overall survival prognosis had noticeable shrinkage of non-targeted metastases and is still alive and considering new clinical trial options one year after the histotripsy procedure.

In addition, this report highlights the differences between two Focused Ultrasound modalities. Thermal US guided FUS was performed previously and obtained a substantial volume ablation but no immune effects. Histotripsy, with less volume ablation generated a noticeable abscopal effect and this data will influence future research assumptions.

Histotripsy is a disruptive technology. The non-thermal and non-invasive characteristics of histotripsy offer patients the potential for a tumor treatment with fewer clinical complications and adverse events than currently available ablation methods and surgical procedures. The safety of histotripsy has been demonstrated through rigorous testing to include bench and preclinical acute and chronic studies. Future clinical trials with the objectives to evaluate technical performance, including acute technical success, while collecting safety-related data are forthcoming. In addition, further clinical trials should continue to explore histotripsy-mediated immune effects in detail. 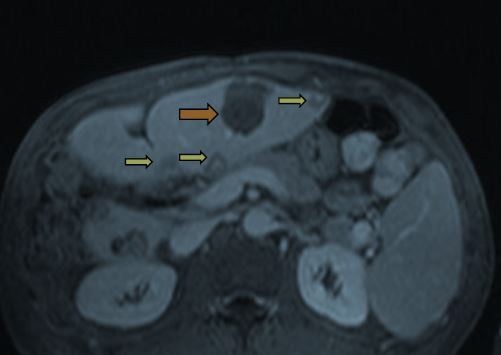 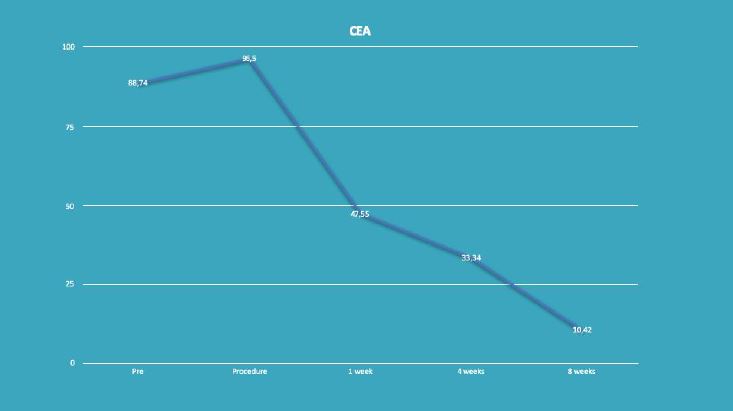